On Saturday at Master Wolf’s British Championships in Margate 05/05/2018 a team of 6 Fighting Mavericks competed and we had fantastic results from every fighter!

Ethan Vince-Odozi was competing in only his second competition and came away with a Gold in points, then fought brilliantly in the continuous but was unlucky in the end.

Aashal Gurung has been a student at Mavericks for a number of years and competed in his first tournament in Margate this weekend. He put in an excellent performance in the intermediate points, taking Gold then Silver in continuous after narrowly missing out in extra time to a much bigger opponent.

Lili Parsons was also competing in her first competition, and did an amazing job, taking Gold in points and then fighting 3 back to back fights in continuous, again narrowly missing out in extra time but taking Silver- an excellent result or her first comp!

Chris Fielder has competed a couple of times making Margate his 3rd. He shows great improvement every time he competes this weekend coming away with a double Gold in novice points and in intermediate continuous.

Navneet Sihra and Tom Adams- The boys competed in the same category I continuous, both going through to the final and competing against each other with Tom taking the Gold and Nav coming away with the Silver. Nav then went on to compete in the intermediate points, coming away with gold and Tom in advanced points fighting brilliantly and just losing out coming away with the silver. 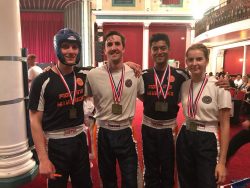 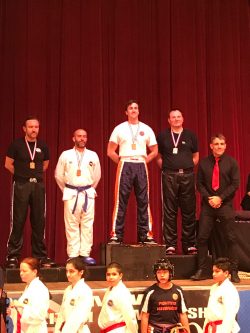